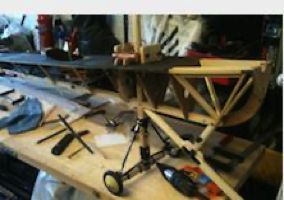 were a pair of aviation pioneers working out of Brooklands from 1910 and building what I can only describe as sporting monoplanes. By 1913 they were engaged in building a Transatlantic Monoplane. Historically, we should appreciate that a certain T.OM. Sopwith was amongst their earliest flying students and customers. After the outbreak of World War I, in 1915 they moved to Woking and built several thousand aeroplanes of their own design, S.1.'s, Elephants and Buzzards plus subcontracted batches of B.E.2c's & S.E.5a's. It is also noteworthy that Sir Sydney Camm was one of their earliest employees. After the war, as per all aeroplane constructors, work dried up and they turned their hand to building farm carts and motorcycles. Sadly the factory burnt down in 1921 and the business closed. I am in the process of building a 1/4 scale replica of their number 2/3 monoplane. This has been reverse engineered from pictures and drawings from sources such as early Flight and Aeroplane magazines from the National Aerospace Library in Farnborough. Do go there for all aviation historical research matters if your interest is serious and appropriate. Images show the original at Brooklands, the construction during 2013, the completed model in 2014.

The model is now in display in the FAST museum at Fanborough (open Saturdays and Sundays).